I saw this idea the other day in a magazine. I mindlessly flip through magazines a lot – so I truly have no recollection which magazine it was in – but I thought it was clever. I hardly ever buy bacon or pork. But, my husband loves BLTs (so do i) – so I thought I would try it out.

You just take your bacon and weave it while you’re putting it in the pan. It really takes no time at all. I started with the middle piece and worked out. It only took a minute or two. Then you cook it on medium and then flip it – just like if it’s not woven. Then let it cook and drain for a minute. You end up with a nice crispy flat bacon blanket – which you cut into 4 or 6 even pieces (depending on how much bacon you like on your sandwich – I think Kevin would have liked the whole pound) and them assemble the BLTs. Yummm! Every bite has a delicious bite of bacon blanket that doesn’t fall out of the sandwich! 🙂

I of course took a picture of the raw product – but as soon as that sucker was cooked and hit the plate it started getting picked on. I managed to take a quick (and terrible) picture of the cooked version, but no sandwiches. They were devoured before I could get a photo. Typical! 🙂 Kevin would probably like to sleep with a bacon blanket. 🙂 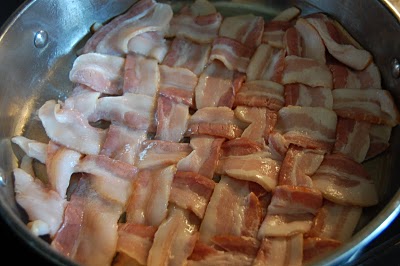 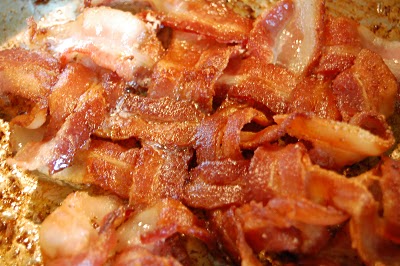