Walking into the Aronoff on the Friday night of “American Idiot” was a very different experience for me. The typical wardrobe of theater patrons had been replaced by jeans, Green Day t-shirts, Green Day hoodies, and gym shoes. I was obviously amongst die-hard fans. I enjoy Green Day on the radio but I think I’m from more of the “Dookie” generation than the “American Idiot” generation (in terms of familiarity). Unknowingly, I was actually dressed in the colors of the show: black, white, and red. Go pregnancy wardrobe! 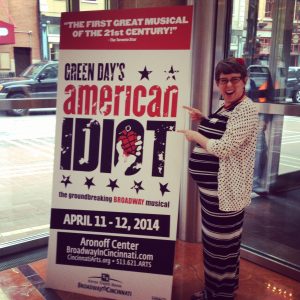 For those like me, those unfamiliar with the premise and setup of American Idiot before seeing it, I’ll share the basics. In mostly the same vein as ABBA’s “Mama Mia” and Billy Joel’s “Moving Out,” “American Idiot” is a production with music from the “American Idiot” album (with a few other selections) and a loose story woven through those songs. After seeing the show, my husband also informed me that the main character’s story is also loosely based on Billie Jo Armstrong’s life. This also makes sense because the book the musical was based on was written by Armstrong and Michael Mayer. It all seems common sense on this side of it, but it’s a different story when you don’t have all the facts at the time 🙂 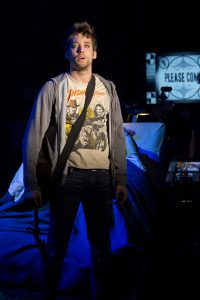 For this show, all of our characters appear to be counter cultural/grunge/goth folks in their late teens to mid-twenties. As such, costumes consisted of hoddies, jeans, leggings, Chuck Taylors, and various other grunge and goth style elements. It was fun for me to look around the audience and see the same clothing on the patrons as well as the cast 🙂 True groupies! Some were even mouthing the words along with the cast as they performed. It reminded me of a “Rocky Horror Picture Show” experience. 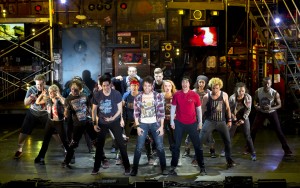 The “pit” consisted of your traditional rock band instrumentation and were actually on stage with the cast. This gave the show an immersive feel each time a new song began – not only were they singing and dancing on stage, the band was right there making it feel like a slice out of a rock concert. My favorite songs were actually those where the ladies sang instead of the guys. Probably just my personal preference, but seeing the different emotional spin a chick puts on a song written for a guy is always cool. 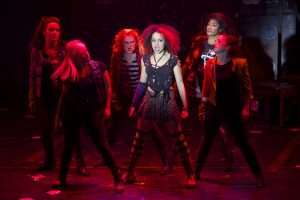 This show is definitely not intended for the little guys. Language, adult situations, and drug use are plentiful. The main character is discontent with his life in a smaller town and wants to leave for the big city. Once in the city, he meets and girl but also is exposed to drugs. Very rapidly, things get very serious with both the honey and the heroin (not exactly sure it was heroin, just love an alliteration). Girl leaves guy because he’s too into the drugs and he goes home still not a rock star. 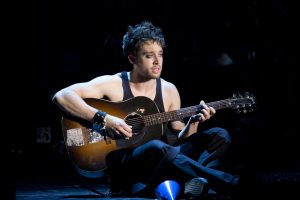 For me, this storyline was a bit cliche. Then again, since it is loosely based on Billie’s life, I know he also had trouble with drug use for a while. I previously compared “Idiot” to “Mamma Mia” and “Moving Out.” “Idiot’s” storyline is a bit looser but still in tact enough to get the idea across. The main focus is on the music. To be honest, to stay so narrow with a music collection (one single album) and still be able to pull a storyline out if it, I’m pretty impressed. Now, if only someone would make a show using Queen’s catalogue I’d be a happy happy lady. Love me some Freddie Mercury 🙂 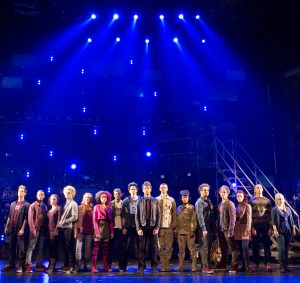 AMERICAN IDIOT, a 2010 Tony Award®-nominated Best Musical and 2010 Grammy Award winner for Best Musical Show Album, features the music of Green Day with the lyrics of its lead singer Billie Joe Armstrong. The book is by Armstrong and Michael Mayer and direction is by Tony Award®–winner Mayer (“Spring Awakening”).

The acclaimed creative team also includes choreography by Olivier Award-winner Steven Hoggett (“Black Watch”) and orchestrations and arrangements by Pulitzer Prize-winner Tom Kitt (“Next to Normal”). The Tony Award®-winning scenic design by Christine Jones and the Tony Award®-winning lighting design b y Kevin Adams will also be featured in the tour.

Winner of two Tony Awards®, AMERICAN IDIOT is the story of three boyhood friends, each searching for meaning in a post 9-11 world. Through incredible spectacle, thrilling performances and with the hope embodied by a new generation, AMERICAN IDIOT has given audiences the time of their lives night after night since its Broadway run at the St. James Theatre (March 2010 – April 2 011) and it s subsequent national tour, which launched December 2011 in Toronto.