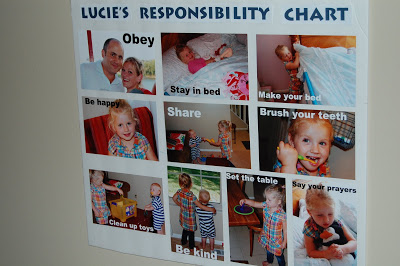 I made Lucie a responsibility chart last week. So far it’s been working really well.
I chose 10 things that she is responsible for and took pictures representing those things.

Then I uploaded them to Picnik. Thanks Tracy!! I never knew about this site. It’s so much fun! AND EASY! I uploaded the pics and then added the words and then saved them back to my computer. Uploaded the new pictures to Walgreens and whalaa…Fun new pictures with words. The whole process at picnik for 10 pictures took about 20 minutes. Amazing! Who needs Photoshop…..(OK – I still want it – but this was FREE) 🙂

So, I had some foam core board from the Dollar Tree and I put the pics on it. Lucie knows what each picture means, and now gets to see and practice the words. She shows everyone who steps foot in the house her “sponsibilitys”.
So, onto the reward part….because she is the kind of kid who craves incentives.
I found an old jar that was small. It was for artichokes. And I found a picture of something that I know she wants….a stuffed panda bear. (she has a little friend who has one and she always tries to take it home and cries when we leave it)
I pasted the picture of the bear inside the jar. She gets a glass marble every time she does one of the things on the chart. And she gets a marble taken away when she doesn’t. When the panda is all covered up with marbles…..we go and get a panda just for Lucie.
So far this has been working like a charm. I’ll let you know if I have to change it up at all. It’s been good for her counting skills – she loves to count how many marbles she has earned. I think it is really helping her understand cause and effect too. 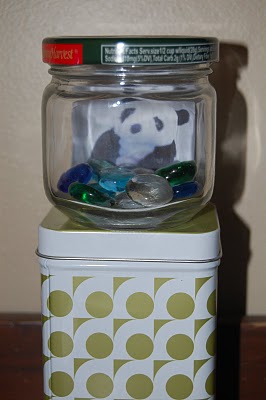