How about starting off this new year by taking the whole family to see a college basketball game!?  OH YEAH!  I haven’t ever taken the kids to see one before and I know they’re just going to love it!  I can’t wait.   And NKU is a NCAA Division 1 level now!

Cincy friends, love supporting your community?  Want an exciting and fun night out with the family?  Enter below!!

Here’s more about the team this year.

“It’s a new era for Northern Kentucky University men’s basketball. Competing in just its second season at the NCAA Division I level, the Norse have already emerged as a contender in the Atlantic Sun Conference. NKU looks to sustain the momentum established with a 9-9 conference mark last year, and they are off to a good start. With a 3-2 home record heading into the new year, NKU is poised to compete in the A-Sun again this year.  And with no seniors and only one junior on the squad, the team is one of the youngest in the country. That hasn’t hindered Dave Bezold’s squad. The Norse already have overtime wins this season against Tulane, Hampton, and Stetson; their losses include road games at Kentucky, North Carolina, Purdue, and Florida Gulf Coast (fresh off last year’s Sweet 16).  Sophomore forward Jalen Billups returns this year after sitting out most of last season for health reasons. The first-team preseason A-Sun selection earned national attention at North Carolina with a thunderous rebound dunk that landed him at No. 3 on the SportsCenter Top 10.  Just four days later, freshman Daniel Camps repeated the feat, finding himself No. 5 on ESPN for a jam against Florida Gulf Coast.  It is a new era indeed at NKU, with high-flying action against the nation’s best competition. Though not eligible for the NCAA Tournament until the 2016-17 season, Billups and company have their cites set earning a berth in one of the other national postseason tournaments in the meantime.” 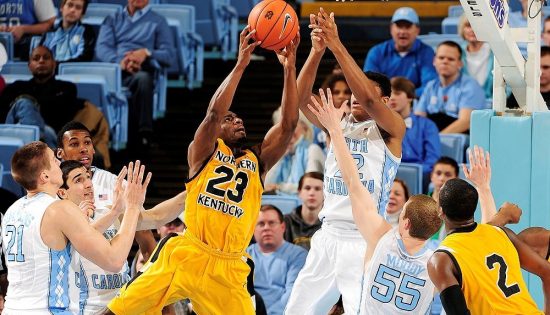 Disclosure: The tickets in this giveaway were provided by Vision 2015. I was also provided with tickets to take my family.