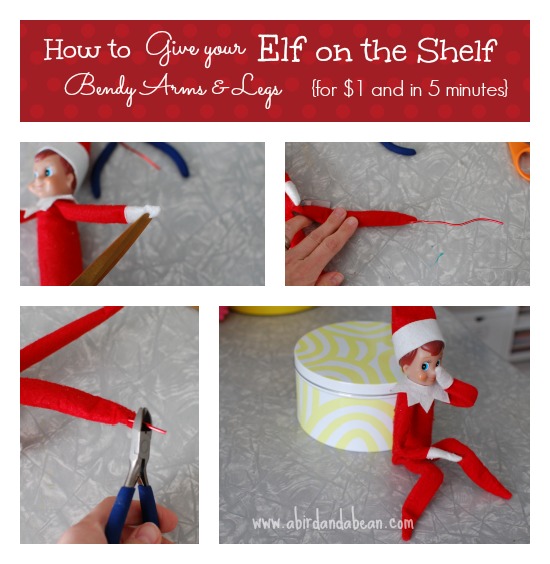 We love our Elf on the Shelf.  His name is Alfie.  The kids think it’s so much fun to find where he is hiding or what funny thing he got into every day.  And I love watching them!  Ahh.  Memories.  Honestly,  I have just as much fun trying to think of funny things for him to do.  When they notice he’s moved from a spot, they tear through the house looking for him.  It is hilarious and so much fun!

We got Alfie just last year, so we’re still fairly new Elf on the Shelf parents.  🙂   But, when we opened the box, I was surprised that his little felty arms and legs weren’t bendy.  I saw so many posts with Elves doing hilarious and clever things that required bendy limbs.  (Like bench pressing marshmallows, or zip-lining into the Christmas tree, or baking cookies.)

I wanted our elf to do these hilarious and clever things, too…. so I fixed him!

I performed a little elf surgery, and in 5 minutes (and for 1 dollar and without sewing!)  we now have an elf that can compete with all the other clever bendy-armed elves.  Alfie feels much better about himself now that he can grasp things!  😉

But, since I made Alfie bendable last year, he’s already fixed.  I needed an unsuspecting elf  to perform surgery on and take pictures of, so that I could share it all with you.  The Healthy Hen and I hatched a plan.  Her elf, Fred,  is boring and un-bendy.  He feels sad.  (She’s more sporty, less crafty!)  We met in a dark parking lot, late at night m with our elves in Kroger bags.   The switch was made.  Our children searched empty houses for elves that were not there.  heehee.

I sliced, cut, poked and prodded Fred all while my kids were in the next room!  🙂  It’s done.

And he feels so much better. 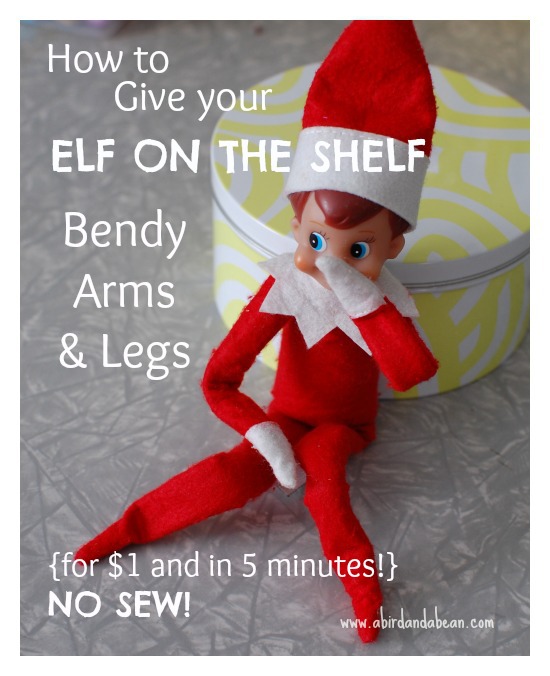 If you’re stumped for ideas of what funny things your elf can do each day, check out this sweet Elf on the Shelf calendar that Steph made at A Little Moore.  She rocks!

We got Alfie last year in the middle of December.  So it’s not too late for you to run to the store and start this hilarious tradition.  Or you can buy one here.