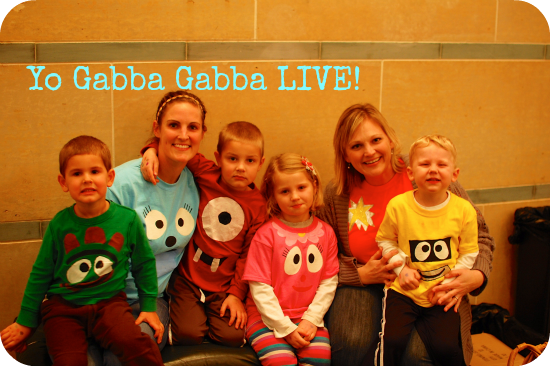 We had so much fun at Yo Gabba Gabba Live.  We didn’t tell the kids where we going or what we were doing until we got there.  Of course, I did make everyone put on the Yo Gabba Gabba shirts we made them first, so they may have had a little clue.  🙂  (I’m DJ Lance, because I’m the boss!)

When we got there we were greeted by life-sized cut outs of all the characters!  So, that was awesome!  We took some pictures.  🙂

Then, we went to the lobby where there were lots of fun things to do while we waited for the doors to open.  There was a “Party In My Tummy” bean bag toss game (aka corn hole) where you got to feed Muno and Brobee fruits and veggies (aka bean bags)!  Then, there was a cool little music area set up where you could play with drums and rainmakers.  There was also a very cute colorful house where you had to put each character in its matching colored room and turn lights on and off.  It seemed so simple and silly….but the kids LOVED that little house!  The kids got a stamp of one of the characters for each little thing they did until they had them all stamped on their hands.  Too cute. 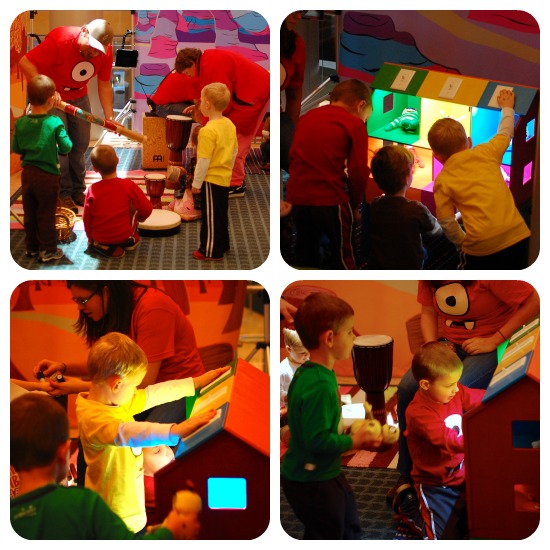 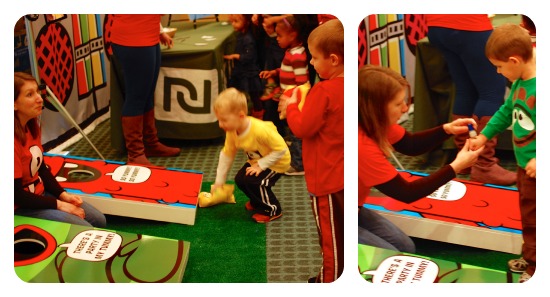 There were a few booths selling snacks and drinks, but that might vary by location. (We brought our own!)  😉 There was also a big table selling all kinds of cute shirts and toys and accessories.  (All were very expensive).  Luckily, we didn’t need any shirts since I made them!  ha.  (It costs about 5 bucks per shirt to make them versus 20 bucks to buy them.)  And we didn’t need any of the toys since we already have the little Ty beanie toys.  (The same Ty beanie characters were $15 at the venue, but about $6 at a store.)  They also had a guy selling light up, glow things…Spinners, necklaces, wands and stuff.  They were all about 10 bucks each.  So, we didn’t get any.  But, several families in the seats around us were WAY SMARTER than us and brought their own from the dollar store.  Stinking Geniuses!  I so wish I would’ve thought of that!

Most kids (and some parents) were in some sort of full costume or a Yo Gabba Gabba t-shirt.  It was really cute to see tiny DJ Lances and cute little Foofas and itty bitty Plexes all over the place. 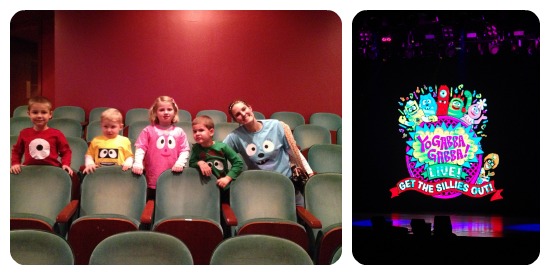 The show was great.  It was like being in the TV show.  The kids LOVED it!  (OK, so did I.)  It was just fun.  Confetti and streamers and singing and dancing.  A great party.  It lasted about an hour and a half with a 20 minute intermission.  There were dancing fruits and veggies up and down the isles during “Party in my Tummy.”  That was great.  And Biz Markie was there!  They had some kids from the audience up on stage doing Biz’s Beat of the day with him.  Cute. 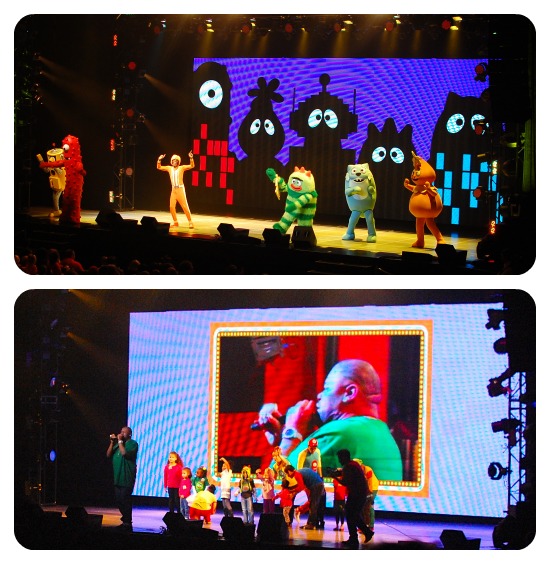 We sat in the very back row so were surrounded by all the ushers.  FYI …. You are not allowed to dance in the isles.  Actually you are not allowed to dance in the isles when you sit in the back by the ushers….but the kids up front can.  haha  You are also not allowed to take pictures of your kids with DSLR cameras when you sit by the ushers.  You can take pictures AND video of the whole show with your point and shoot cameras and smart phones only.  Odd rule.  But rules are rules.  🙂  We may or may not have gotten in trouble!  Shhh.  😉

It was a great show and a fun night.  I’m so glad we got to go.  If Yo Gabba Gabba Live is coming to your town and your kids like the tv show I highly recommend it.  You will not be disappointed. 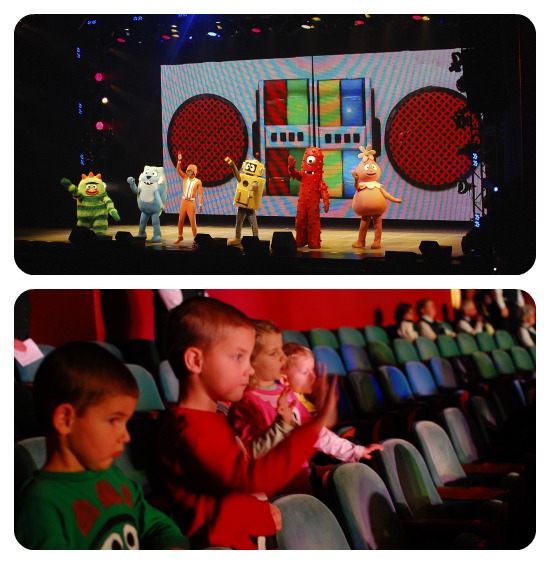 This is “The Goodbye Song.”  (someone is not happy about it being over….and check out those ushers, there were 9 of them behind us!)  😉

Yo Gabba Gabba! Live! Get the Sillies Out! is touring all over the place in 2013.  Check out their website to find a show near you.

I was given complimentary tickets for review purposes.  This review is my honest opinion.