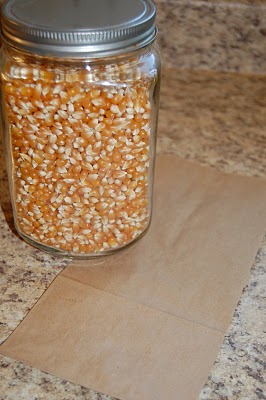 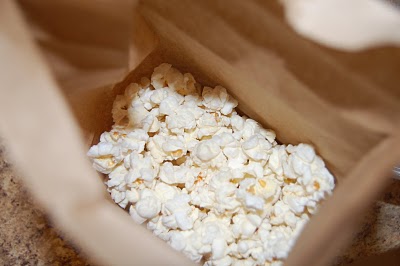 I LOVE popcorn.  I think it’s just about the perfect snack.
But, microwave popcorn is spendy and has gross and scary chemicals in it.  Even the “organic” kind.  Seriously – did you know that the microwave popcorn butter smell and taste is completely simulated?  It’s a chemical called diacetyl, which smells like real butter and can be super dangerous. They put it in – just to fill your house with that fake buttery aroma!  Diacetyl can cause a serious lung disease, which used to only effected popcorn factory workers, but now threatens consumers as well. Lots of other things have diacetyl in them (like wine) but it’s only harmful when it’s brought to very high temperatures and then the vapor is inhaled.  Yikes!!  But, that’s not even all – the paper popcorn bags are lined with bad plastic and even more chemicals – to keep things fresh for long periods of times and keep the oils from seeping out. Then these flourotelemers are released during the high heat and popping process and coat then the popcorn.   Flourotelemers are converted by our body into chemicals that are known carcinogens.  Sweet.  So, what if you don’t want to bring out the pan and oil just for a little snack.
Here’s the alternative.
It couldn’t be easier…..
Take a paper lunch bag.  Put a few handfuls of popcorn in it.  Fold it over a few times.  Pop it in the microwave for a few minutes.
Keep an eye on it until you know how long your microwave takes to pop.  Also, experiment with the amount of kernels since some brands are more fresh and pop more.  It might take a few tasty trial runs to get the ratio worked out for your particular situation – but it’s SOO easy.  Some people put a staple in the top (which I’ve been assured is OK even though it’s metal in the microwave) but I haven’t had to do that – I just fold it.  Some people put a splash of oil or a pat of butter in too – but I just wait until it comes out to do that.  It is such delicious, crisp and fluffy popcorn – you will never go back!  Enjoy.
I know that the microwave is bad for you, too.  Baby steps.  🙂