“A plague of sighing and grief! It blows a man up like a bladder.” – Falstaff, Henry IV part 1

(Before I get going, I must forewarn you that I ramble quite a bit in this entry to give the play’s tone and Shakespeare himself some context. For the meat and potatoes of the actual production, please ignore the contextual and personal ranting of the first 8 paragraphs, and skip right down to the 9th, where I dive into the production itself. Okay, on with the show)

Up front, I should probably own up to being a Lit. major in college.  As such, through an overwhelming desire to not outright fail the classes in my major, I became decently acquainted with the work of Willie Shakes, and eventually, had the Shakespeare Illusion demystified a bit.

By “The Shakespeare illusion,” I refer to a false belief I operated under that the Bard was an elegant poet meant to be understood by the upper class and privileged of the time alone. (He was the Queen’s playwright after all.) A man whose words resonated with such beauty and romance that nearly any girl who could make sense of them would nearly swoon when even thinking of his sonnets.

It took only a proper understanding of a single scene from Romeo & Juliet to have that image shattered. You probably even know the scene – the famous balcony encounter between the star-crossed lovers. Juliet offers to shed her name and family for the sake of her great, true love. Romeo compares Juliet’s beauty to the very creations of God himself. Juliet, on the condition that Romeo shall return the following day, offers herself, her life, and her hand in marriage if Romeo will swear his love. And then, just as Juliet begins to turn away, Romeo, in a fit of inspiration, cries out “Wilt thou leave me so unsatisfied?”

“Wilt thou leave me so unsatisfied?”  In my simplistic high-school mind, I thought this was a cry from Romeo to his one true love to be able to express his love in a deep, albeit probably physical way. It was not. (Well, it was, but not in a gentlemanly way at least.)  To Shakespearean audiences, this would have been the modern equivalent of a teenager yelling to his brand new girlfriend “Uh…Uh…but I’m kinda aroused here!”

And thus, the illusion was shattered. Shakespeare went from something I was always thought he was (elegant, romantic, ethereal) to what he actually was – a man who wrote his plays “for the masses,” the blue-collar, working men and women of his day. Now don’t get the wrong idea – these two things aren’t mutually exclusive. For anyone who ever had to (or chose to) read “The Canterbury Tales” by Geoffrey Chaucer, it’s the same basic concept. Within the tales, you have stories of honor, nobility, humility, betrayal, and some unbelievably beautiful poetry. You also have “The Miller’s Tale,” which may be the most elegantly written (and longest) dirty joke in history. (Spoiler: It starts with sex and ends with lighting a fart on fire. Remember kids – these are the classics.)

Once the Shakespeare illusion went up in smoke, his plays begin to make a lot more sense. Romeo and Juliet weren’t poetic teenagers with beautiful souls – Juliet was a teenage girl of (probably) above average intelligence who met a cute boy and became twitterpated, while Romeo was a slightly below-average teenage boy with raging hormones who spoke in below average, immature poetry (as, granted, most teenage boys would). He goes from being madly in love with one hot girl to being madly in love with the very next one he even makes eye contact with. 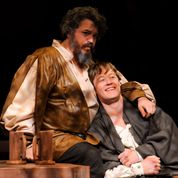 The Shakespeare illusion I had in mind wouldn’t have even allowed a character like Falstaff to exist in my brain. Once the illusion was busted though, Falstaff could live, and revel in his own glory, and run from conflict, and lie (a lot), and fake his own death, and claim credit for an other’s achievement,  and encourage royalty to steal from the meek for no real reason other than “just cause,” and then he could drink. And drink. And then drink some more. Oh boy could he drink. (Falstaff the character really likes to drink.) And finally, more importantly than all of this, he could justify any unsavory action he had part in with whatever random b.s. ran through his head at that moment. Much like George Castanza once quipped, “It’s not a lie if you believe it,” and Falstaff seemed to believe every single word which ever escaped his lips. 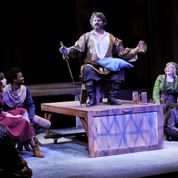 Matthew Lewis Johnson as Falstaff and friends in the pub in Cincinnati Shakespeare’s 2014 Production of “Henry IV: Parts 1 & 2”. Photo by Rich Sofranko.

Falstaff, close friend of King Henry IV’s son (and heir to the throne) Prince Hal, is one of the most beloved Shakespeare characters of them all. Make no mistake about it – Henry IV (parts 1 and 2) are definitely about the boy who would be king, but more than even these plays are about Prince Hal, they’re about his fun-loving friend who gets Hal into trouble in the boy’s days as a prince (and tries to pull him back into it again once he becomes king). 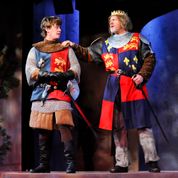 (Those sane enough to skip ahead can pick up reading here.) I give this much background to the play solely because of what I am about to tell you: The production of King Henry IV parts 1 & 2 at the Cincinnati Shakespeare Company downtown is absolutely phenomenal, and that is not overselling it in the slightest. This is worth your time. This is worth your money, and if you’re currently under the Shakespeare illusion that I once was, this is the perfect play to shatter that illusion into little, tiny pieces. You’ll be wowed by the expert direction of the story (handled by CSC’s top dog, Brian Isaac Phillips), the terrifically understated (and incredibly charismatic) performance of Justin McCombs as Prince Hal (which stands out even among CSC’s usual lofty standards for leads), and the fantastically endearing portrayal of Falstaff by Matthew Lewis Johnson.  Additional mentions must be made for Charlie Cromer for a quality performance as Hal’s brother Prince John (the two actors had an enjoyable chemistry together in the brief scenes they shared), Sara Clark for providing her fair share of chuckles as a silent young boy in Falstaff’s entourage (with a persistently runny nose), Darnell Benjamin as the mischievous Poins, and also to the production staff as a whole, for providing a wonderful world for this story to unfold in. 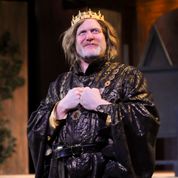 For those unacquainted with the Cincinnati Shakespeare Company, what they specialize in is taking a language style that is at least a little confusing for most people, and performing it in such a way that even the most uninitiated Shakespeare viewer can make sense of the bard’s work.  They do this using primarily minimalistic set designs and props in a theater which is as intimate as it is charming. Like the original Shakespeare productions themselves, it is round theater meant to be enjoyed by the masses. So head downtown, stroll into the theater, grab a beer or a glass of wine at the theater (which they encourage you to bring inside for the show), and let some very talented people put a big smile across your face with some fairly crass humor for the next couple of hours…all while getting culturally enriched. Who ever said that poetry and debauchery shouldn’t go hand in hand anyway?

Tickets to this show were complimentary. All opinions are 100% those of the author of the post.