Greetings everyone in A Bird and a Bean world 🙂  I usually do the reviews for the fun shows in the area but today’s review comes to us courtesy of my husband, the die-hard Shakespeare fan, James Proffitt.

You see, I am now 15 weeks pregnant and staying up late for multiple shows in the same week just wasn’t gonna happen.  So, James got to geek out super hard and go see his absolute favorite Shakespearian play of all time.

Take a look below, that’s my husband in our cute pregnancy announcement (get it, Ice Ice BABY!). 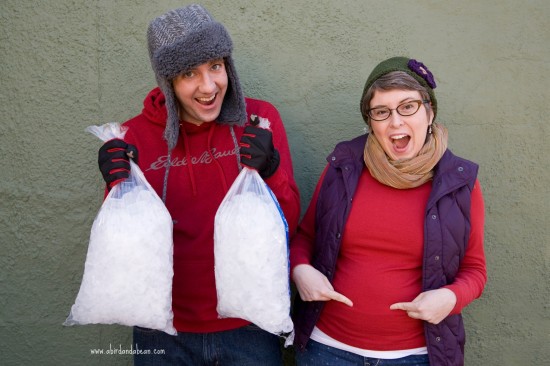 Hi there A Bird & A Bean’ers. My name is James and I’m the normal A&E contributer’s hubbo.

I understand that she’s already handled the introductions, so with those formalities out of the way, let’s get on to talking about CSC, “Hamlet,” and my boy Willie Shakes. 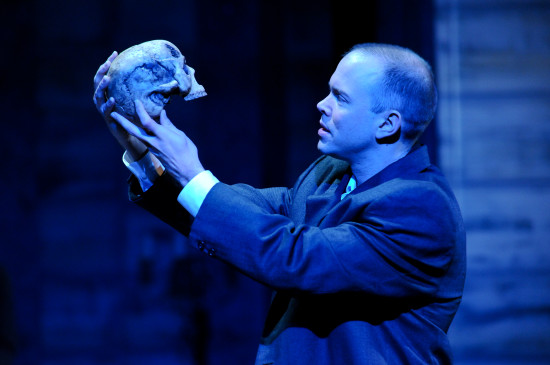 First off, as background, “Hamlet” is generally considered to be Shakespeare’s greatest play.  Ostensibly, it’s often referred to as the story of “a good man in a bad world.” More specifically, it’s a story about revenge, justice, morality, mortality, loyalty, faith, friendship, courtships gone wrong, repentance, murder, casualties of compromise, and theater’s most famous instance of the “play within a play.”

Even more specifically, the “short short version” (I’ll always love you, “Spaceballs”) would go like this:

Hamlet is the prince of Denmark. His father, the king, has recently died. His uncle (the King’s brother) has taken the queen as his wife, and assumed the throne as King of Denmark. Hamlet, a man of faith, is greatly troubled by this turn of events , as he doesn’t feel the marriage is moral, nor does he understand how his mother has moved on so quickly from the loss his father. The ghost of the king appears to friends of Hamlet, and later to Hamlet himself, telling Hamlet he was in fact killed, that the new king was behind it, and that his soul cannot rest until his death is avenged.   Once Hamlet finds enough proof to feel that the specter’s words were true, he goes about the business of killing his uncle, but not before just about every other person attached to this sad little story dies along the way. (With Shakespeare, his rule of thumb was that every comedy should end with a wedding, and every tragedy should end with a slew of murders. Hamlet has the sort of slew that makes all the other slews jealous.) 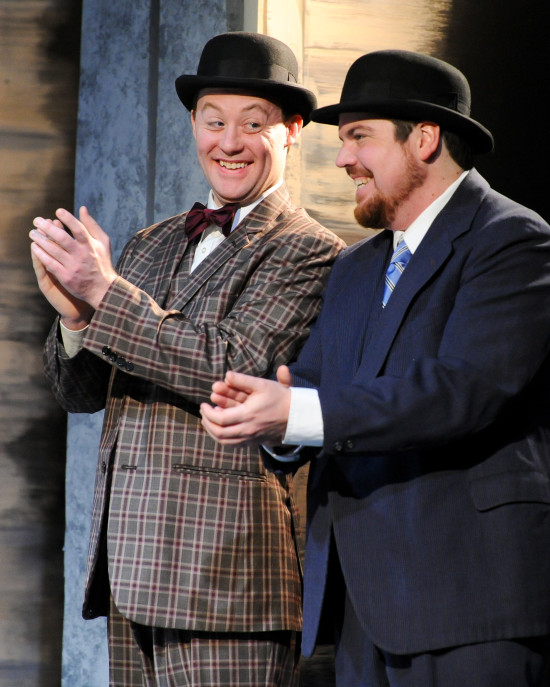 Justin McCombs and Billy Chace as Rosencrantz and Guildenstern in CSC’s 2014 production of Shakespeare’s “Hamlet”Photo by Rich Sofranko.

Now, performing Shakespeare for audiences who, for all you know, don’t understand a lick of Shakespearian language, is always the challenge. It takes very talented charismatic actors and some high quality direction to really get the main points across in a way the casual audience member can understand. For those of you who have never visited the Cincinnati Shakespeare Company, this is what they specialize in. 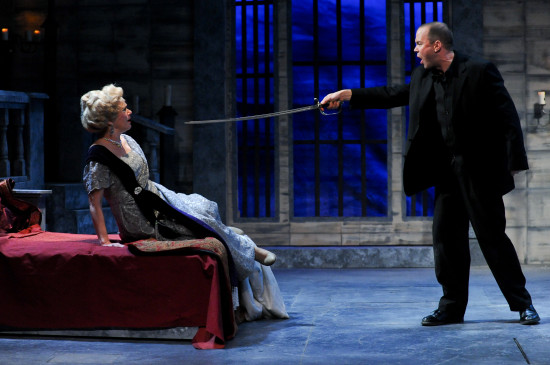 Sherman Fracher as Gertrude and Brent Vimtrup as Hamlet in CSC’s 2014 production of Shakespeare’s “Hamlet” Photo by Rich Sofranko.

As for the production of this particular play itself, it was quite the impressive (and thoroughly enjoyable) experience.  Expertly directed by longtime CSC member & artistic director Brian Isaac Phillips, this production felt at once grandiose, yet incredibly personal. “Hamlet” is the story of deeply personal events that affect the fate of an entire nation, and both the scope and spirit of that story were expertly captured in this production.

When you feel like you’ve seen a great all around show, picking stand-out performances can be difficult. (Brent Vimtrup did a fabulous job capturing the crusade and complications of the Hamlet character. Bruce Cromer brought life to every scene as Claudius. Justin McCombs & Billy Chace were completely enjoyable as Rosencrantz & Guildenstern. )  However, for me personally, the show-stealer this time out seemed to be Sarah Chalke. Her portrayal of Ophelia’s descent from optimistic love-struck girl into madness was as absolutely captivating. When I see a play, I usually look for one or two things to refer back to once I finish. Whether it be a certain scene, a particular song, or a critical moment in the narrative that really stops the show. When I think back to this performance, Sarah Chalke’s Ophelia will be the first thing that comes to mind. I really can’t say enough good things about it.

For an amateur Shakey geek like me, this was a true dork out moment. Hamlet is my favorite work from “The Bard,” and even my high expectations were exceeded in this performance. For a casual dater or newbie to Mr. Shakes, this might be a good play to get your feet wet. It’s got drama, it’s got comedy, it’s got great performances, and the next time it runs, it’s got my money. 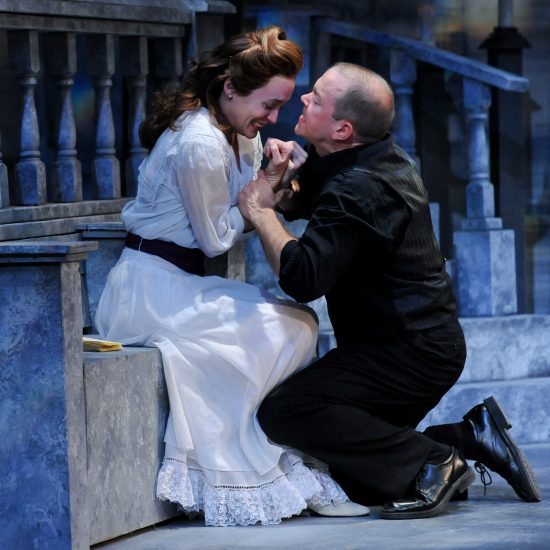 Sarah Chalke as  Ophelia and Brent Vimtrup as Hamlet in CSC’s 2014 production of Shakespeare’s “Hamlet”Photo by Rich Sofranko.

Performances of “Hamlet” are scheduled from January 10- February 8
on Thursday, Friday & Saturday evenings at 7:30pm and Sundays at 2pm.
Preview performances are on Wednesday Jan. 8 and Thursday Jan. 9
at 7:30pm and tickets are $20.
No performance on Sunday January 12 or February 9.
The theater is located at
719 Race Street
downtown Cincinnati
two blocks west of the Aronoff Center.
Single ticket prices range from $22-$31 on Thursdays and Sundays and from $26-$35 on Fridays and Saturdays.
If available, $14 student rush tickets may be purchased 30 minutes before a show with a valid student ID. Visa, Discover, MasterCard, and American Express are accepted. Ticketing fees may apply. Discounts are available for students, seniors and groups as well as Enjoy the Arts and AAA members.
To purchase tickets or for more information, call the CSC
Box Office at 513.381.BARD (2273) ext. 1, or go online at www.cincyshakes.com.
Disclaimer: I was given complementary tickets to this show for the purpose of reviewing it. All opinions expressed are my own.

You can connect with Stephanie on Pinterest.  You’ll be glad you did.  She’s full of eclectic, kitschy, vintage surprises.