Fall 2013 has been a season of new adventures for me and the theatre and I’m super excited about all of it! Last week my husband and I went to see the Cincinnati Shakespeare Company’s production of Twelfth Night – my first time with this theatre and this play! My husband, James, was a literature major in college and is a Shakespeare buff in his spare time (our bookshelves contain multiple volumes written by the Bard himself). Since I’m more of a fan of Shakespeare’s comedies, James told me I would definitely enjoy this show – he considers it one of Shakespeare’s funniest! 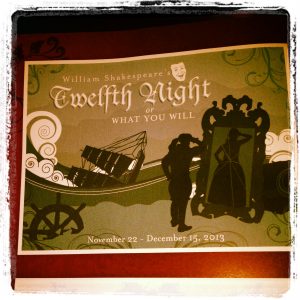 The Cincinnati Shakespeare Company is on Race Street in downtown Cincinnati. Since this was my first visit, I made sure to commemorate the occasion with a photograph of me alongside the Shakespearean Cincinnati Pig! Note the Hamlet skull in the Pig’s right hand…sadly, I had to pretend I had my own skull. **Please note that I was also freaking freezing at this moment – apologies for my pained expression and massive bundled coat. 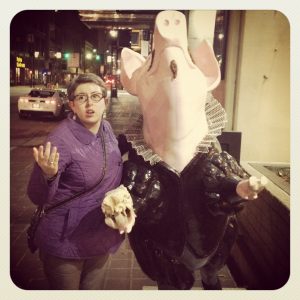 Many times, Shakespeare’s plays will be set in different time periods (I’ve seen Romeo and Juliet set in the 50’s, complete with poodle skirts) but refreshingly (and happily for me for my first visit to this theatre), this production of Twelfth Night was set in period costume (see below). Don’t get me wrong, I thoroughly enjoy many different interpretations of the Bard’s works but for me, the period costumes and setting really set the mood for me 🙂 I mean really, look at those colorful gents and try not to smile! 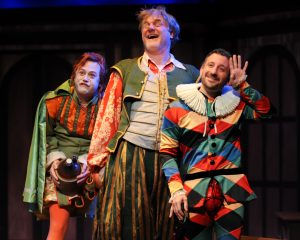 Twelfth Night is a play that deals a lot in the area of gender (one of the main characters, Viola, played wonderfully by Maggie Lou Rader, is a woman who dresses and passes herself off as a man out of self preservation after a shipwreck). This theme leads to some hilarious scenes and laugh out loud confusion amongst the characters but make sure to keep this and a few other over-arching adult themes in mind when considering bringing some young ‘uns. Twelfth Night makes for a great date night or fun night out with friends who might be visiting for the holidays. 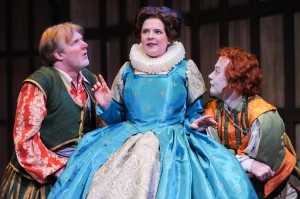 My favorite part of the whole production was right after intermission: we were all given the heads up that following the break, we’d be able to participate in a drinking song! The cast comes out to join us on the stage and down the aisles and the words to the song are in your program. When you come out to the play, make sure to make a stop by the bar at intermission for your choice of non-alcoholic or alcoholic beverage (they even have Shakespearean themed beverages!!) and bring it back with you after intermission!! It’s like we were all part of the show 🙂 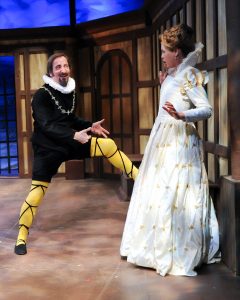 (From left) Paul Riopelle as Mavolio and Corinne Mohlenhoff as Olivia Viola in CSC’s 2013 production of William Shakespeare’s “Twelfth Night”. By Rich Sofranko.

Oh yeah, and my own personal Shakespeare buff left the theatre after the show legitimately bubbling with excitement. If you have anyone like this in your life, tickets to Twelfth Night would be a great gift!

Performances of “Twelfth Night” are scheduled from November 22- December 15, 2013 on Thursday, Friday & Saturday evenings at 7:30pm and Sundays at 2pm. Preview performances are on Wednesday Nov. 20 and Thursday Nov. 21 at 7:30pm and tickets are $20. No performance on Sunday Nov. 24 or Thursday Nov. 28. The theater is located at 719 Race Street, downtown Cincinnati, two blocks west of the Aronoff Center. Single ticket prices range from $22-$31 on Thursdays and Sundays and from $26-$35 on Fridays and Saturdays. If available, $14 student rush tickets may be purchased 30 minutes before a show with a valid student ID. Visa, Discover, MasterCard, and American Express are accepted. Ticketing fees may apply. Discounts are available for students, seniors and groups as well as Enjoy the Arts and AAA members. To purchase tickets or for more information, call the CSC Box Office at 513.381.BARD (2273) ext. 1, or go online at www.cincyshakes.com.

**I was provided complimentary tickets for review purposes but all reviews and opinions are 100% mine.**

Stephanie is a 30-something Kentucky native who loves Jesus, her husband, teaching middle school, and all things artsy. She has a music undergrad degree and loves opportunities to put it to good use.  You can usually find her in a museum, theatre, or planning to travel.