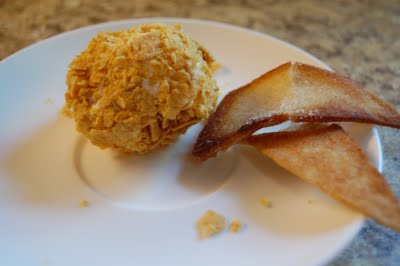 Cinco de Mayo dessert. Fake fried ice cream and sopapillas. This was so easy and a huge hit.

What you need:
a tortilla
butter
cinnamon
sugar
ice cream
corn flakes
honey, whipped cream, cherries (optional)
What you do:
Use an ice-cream scoop or your hands to make balls out of the ice-cream. Place the ice cream balls on a plate and put these back into the freezer.
Put about a cup of corn flakes into a ziplock bag. Sprinkle a teaspoon of cinnamon and a tablespoon of sugar into the bag. Crush the cornflake mixture. Set bag aside.
Cut the tortilla into triangles.
Place 2 tablespoons of sugar and a teaspoon of cinnamon in another bag. Mix together.
Melt about a tablespoon of butter in a pan.
Brown both sides of the tortilla triangles in the pan of butter until crisp. Remove crispy triangles from the pan and place immediately into the bag of cinnamon sugar. Shake the bag.
Place two triangles on each plate.
Remove the ice-cream balls from the freezer. One at a time, place an ice cream ball into the cornflake bag and coat completely. Serve and enjoy!
You can drizzle honey on it, or top with whipped cream and a cherry. I used coconut flan flavored ice cream (WHICH WAS AWESOME!) so I thought honey might be too much. And I didn’t have whipped cream or cherries. Didn’t need it. It was delicious. 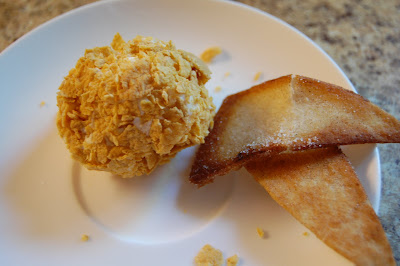