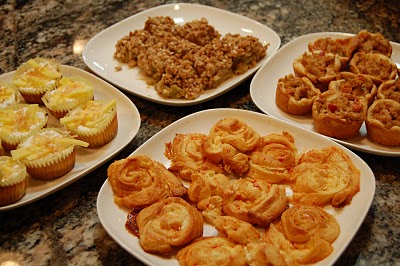 Yesterday was the first, annual “Battle of the Bites” in our family. A client of my sister’s does this with her family – and we thought it was such a fun and fabulous idea – that we totally stole it.

Here’s how it went down…..each girl (myself, my sister, mom, brother’s fiance’) made a snack without the husband knowing what it was. Then, as we arrived at my mom’s house, we put them all on her platters – so as not to give away who made what with recognizable dishes. Then the boys tried each one and then voted with a secret ballot on their favorite. It was so much fun! And they were all so delicious. The winner gets the coveted “APRON OF HONOR”…..until the next battle, that is. This time my soon to be sister-in-law won. Hers were sooo yummy (and pretty). She brought these Key Lime Cheesecakes. She found the recipe on Smitten Kitchen – which is one of my favorite cooking sites ever! We also had ‘Spicy Chicken Cups’ and ‘Rubarb Crumble’.

Mine was delicious too. I brought Pepper Jelly Cream Cheese Pinwheels. I’m going to say that I won second place – even though I have no way of knowing that. hehehe 🙂
To make Pepper Jelly Pinwheels ….
Unroll a sheet of puff pastry or crescent dough.
Spread with softened cream cheese.
Spread that with pepper jelly.
Roll up and pop in freezer or fridge for about 20 minutes.
Slice into pinwheels and bake for 15 minutes on 375.
Yum.

We will have a few rules next time. Like … everyone has to bring an appetizer or everyone has to bring a dessert – since it was hard to pick between two appetizers and two desserts. Some other ideas were that we will all have to use a certain ingredient -Iron Chefish. Like bacon. Which is only fair – because if only one person used bacon – that person would surely win with judges like ours. Or perhaps have different categories on a score card to calculate points – like appearance, originality or taste. This would help since my brother-in-law wrote on his ballot, “Heather”. Nice. 🙂 It was really fun. We might even make the boys do it sometime. We are also thinking that we will keep all the recipes together and make a Battle of the Bites cookbook after a few more. I think we will definitely be doing it more than just once a year. The APRON OF HONOR will be mine!! mwahaha. 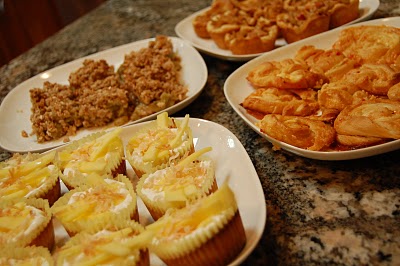 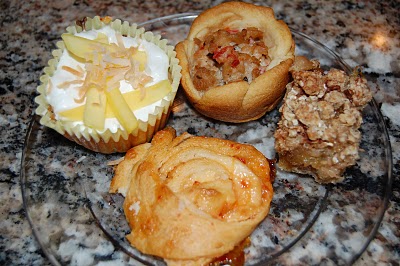